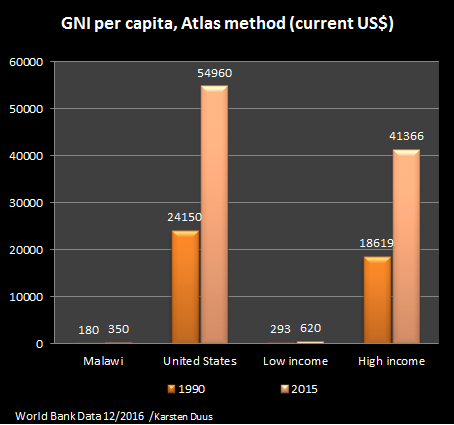 The gap in wealth is enormous in the World.

The poor countries in the graph does not show – it is not a fault – it is because the gap is so big.

One can measure wealth in many ways. One often used indicator is: GNI per capita.

GNI (Gross National Income) tells us something about the total value produced including net-incomes from abroad. Divided with the population you get GNI pr capita. And the “Atlas method” from the World Bank provides technically comparable data.

Basically the same picture is seen when we compare the poorest countries with the richest: The gab in 2015 is 67 times compared with 64 times in 1990.

In other words 1,2 billion people has an average income which is 67 times bigger than the 0,6 billion people living in the poorest countries in 2015. And the gap has even increased between 1990 and 2015.

Perhaps happiness does not rely on wealth – but…?

The data are averages for the countries and the country groups, but within a country there is often bigger gaps in wealth.

Although the data tries to reflect the different “purchage-strenghts” of 1 $ in different countries, it is still difficult to calculate precisely how much the “natural-economy” (non market products) counts. In poor countries one would expect that self grown and family consumed products would reduce the real gap (?). One the other hand the so called “black economy” (income not being taxed) in rich (and poor) countries is important too, and likewise difficult to meassure. The guys in the Statistical Department of The World Bank are aware of these challenges – and do their best to make comparable data. 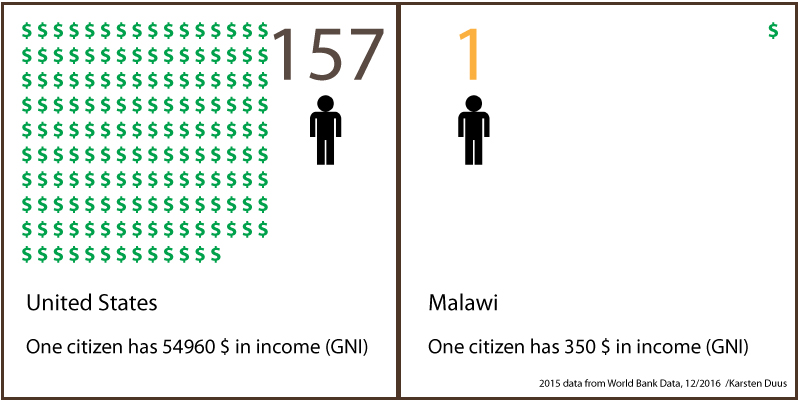